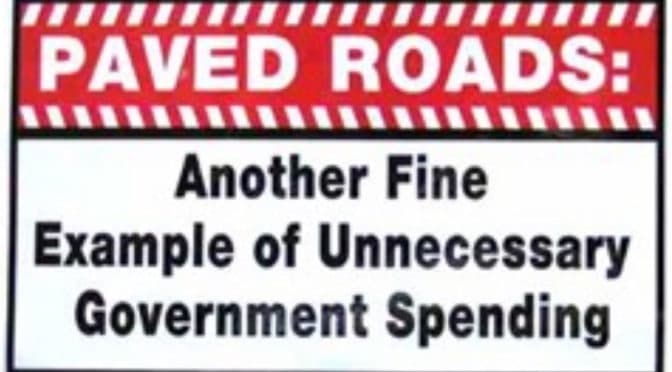 Day-to-day, many of you will have probably seen the above bumper sticker. Perhaps some of you even have this bumper sticker on your car. It is an amusing and sarcastic – albeit cheap – political shot from the political left against the political right’s concerns about budget deficits and the national debt in the United States. For the record, we are talking about an annual Federal budget deficit of more than $1 Trillion Dollars ($1,000,000,000,000) over the last 4 years, and now almost $16 Trillion Dollars ($16,000,000,000,000) of total debt accumulated by the Federal government (more than 100% of the 2012 Gross Domestic Product, i.e. GDP). Incidentally, almost a third of the national debt was raided from and is now owed to the Social Security Trust Fund. On top of this, there are some (cautious) estimates that the Federal, State and local governments in the United States has more than $55 Trillion Dollars ($55,000,000,000,000) in total unfunded liabilities. 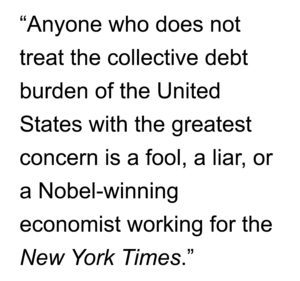 The point is estimates vary from worse to even worse. Anyone who does not treat the collective debt burden of the United States with the greatest concern is a fool, a liar, or a Nobel-winning economist working for the New York Times.

However, this editorial is actually not about debt and deficits. It is about the insidious message this bumper sticker conveys for urbanism in the United States, once we dig a little deeper beneath the superficial sarcasm of the message itself to the paradigm hiding underneath. What do we mean?

First, the message is explicitly about “paved roads.” It is not about the value of roads in general. Indeed, a key aspect of the sarcasm contained in the message lies in the fact that the bumper sticker is readable while you are driving your car, i.e. “isn’t it nice to have a smooth ride on this paved road so you can read my amusing bumper sticker?” Now, of course, not all paved roads necessarily have to be asphalt or concrete roads. For example, cobblestones and brick roads are also paved roads; even the Land of Oz had its yellow and red brick roads. However, such road surfaces rarely qualify as a ‘smooth ride’, especially over the lifetime of that road. Such roads are not conducive to mobile reading, especially for those of us prone to motion sickness. It is fair to conclude that most people will understand the reference to paved roads in the bumper sticker to mean asphalt or concrete roads. After all, most road surfaces in the United States are paved asphalt or concrete and this will constitute most people’s everyday experience of paved roads.

The minimal graphic design of the rudimentary lane striping in the bumper sticker also suggests “paved” is an implicit reference to only asphalt or concrete roads. Alternatively, the graphic design and elongated shape of the “Paved Roads” portion at the top of the bumper sticker could be interpreted as a rudimentary road construction sign, which every American will have experienced; extensively and usually regretfully so in urban areas. More importantly, either interpretation is appropriate to the message itself because this is not how anyone would choose to typically represent an alternative surface such as brick or cobblestone for a paved road. There should not be any doubt that the design of the bumper sticker is both simple and excellent, which is usually the best kind of graphic design.

The paradigm underlying the message should be important to any professional urban designer, planner, traffic engineer, or knowledgeable layman because it explicitly favors impervious road surfaces. For the uninitiated, this means such road surfaces are impenetrable to stormwater, seals the soil surface and eliminate rainwater infiltration and natural groundwater recharge, collect solar heat in their dense mass and when that heat is released, raises air temperatures. 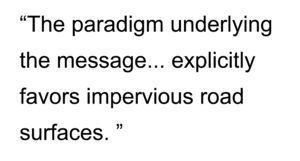 More importantly, the lack of rainwater infiltration makes impervious surfaces the ‘carriers’ for non-point pollution sources. Non-point sources typically means rainwater falling on the asphalt shingles of you house, from there to the lawn with fertilizers and pesticides (or, in some areas, septic tanks), from there to the road into the stormwater sewer system, and usually directly into a nearby water body without any treatment. If you want more pollution, then you want more impervious road surfaces, i.e. precisely the type of “paved roads” this bumper sticker is referencing. Irony has never been an especially strong point of the political left in the United States so it is doubtful that progressives and liberals appreciate the fundamentally anti-environmental message of the bumper sticker on their car (probably a gas-guzzling SUV anyway). The irony, of course, is radical environmentalism has been a mainstay of the political left in the United States since the 1960s.

What about the second part of the message, i.e. “another fine example of unnecessary government spending?” This is also rich with irony in undercutting the superficial message the political left is trying to convey to voters. The power of the message exclusively relies on the reader being uninformed. Most roads in the United States (in gross terms, not total linear miles) are residential streets. The private sector builds most of these roads including many arterial and collector roads to support a plethora of suburban subdivisions. Developers later convey ownership of these arterial (and some collector) roads to public agencies for maintenance purposes. However, these days most of the residential roads remain private roads, which non-governmental agencies such as homeowners associations, neighborhood groups, or community development districts maintain on behalf of their residents. Developers always pass on the cost of constructing the roads to their customers in the price of your home. HOA usually pass on the cost of maintaining the roads in their community to their residents through HOA fees, etc.

The government does build and maintain roads, the interstate highway system being the most obvious example most commonly cited by both the political left and right in the United States. However, most government revenue for capital improvements comes from the taxpayers via user fees and taxes on income or property. In this sense, because the private and public sector always passes the costs of all road construction to you in the price of your home or the taxes you pay to the government, all roads are ‘public’ roads. When it comes to roads, we really did build that… 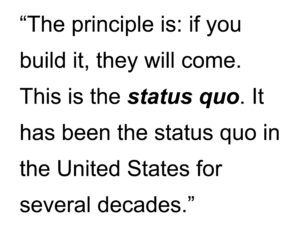 …Or, more accurately, we paid for it even if we did not need or want that road. New road construction only has two purposes. First, to access new land uses, most usually residential (i.e. subdivisions) and/or second, to spur economic development in the form of commercial or industrial land uses (i.e. see numerous examples of ‘roads to nowhere’ that eventually string together an infection of suburban sprawl characterized by strip malls, office parks, and gated communities); and, both are founded on a single principle. The principle is: if you build it, they will come. This is the status quo. It has been the status quo in the United States for several decades. This brings us back to the message of the bumper sticker, i.e. “Paved roads: another fine example of unnecessary government spending.” It is message that insidiously favors the status quo for our contemporary models of urbanism. How has the status quo been working for our cities over the last half-century? The answer to that question should define your reaction the next time you come tail-to-front with this bumper sticker. Perhaps you will find the message as superficial as the vacant paradigm hiding behind it. 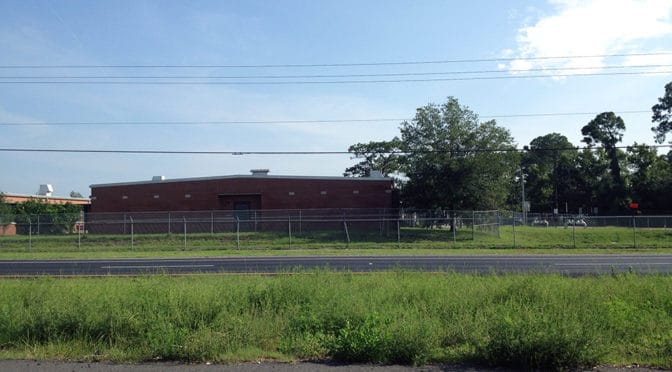 What is this? A Department of Homeland Security/CIA intelligence gathering facility? A minimum security prison to house white-collar/Wall Street felons? No, it is worse. It is an elementary school in a Florida county! This is urban planning and design failing on an epic scale. 1) Built adjacent to a divided surface highway heavily used by semi-trucks. 2) Location? Wrong, wrong, wrong. 3) There are no sidewalks; 4) The school is not within walking distance of much of anything anyway so its urban functioning is completely dependent upon the automobile/school buses; 5) Two perimeter rings of fencing, one to keep the ‘bad people’ out and one to keep the children out of the retention ponds or wandering into the road; 6) When you see a public building with this much fencing, someone (i.e. the public officials) is really afraid of being sued for the most improbable of probabilities but only doing the minimum necessary in terms of cost (as opposed to building the school in the right location in the first place); 7) No visible windows; 8) I attended a high school that used the same plans for a prison in Indiana and this is much worse; and, 9) This is just one example of the mentality that builds schools throughout this county and many others in the State of Florida. However, the design of this school does multitask. It prepares our youngest generation for a future suburban life behind the walls of their gated communities… or their future life in prison. The mentality that builds schools like this one for our children is truly absurd and FUBAR. 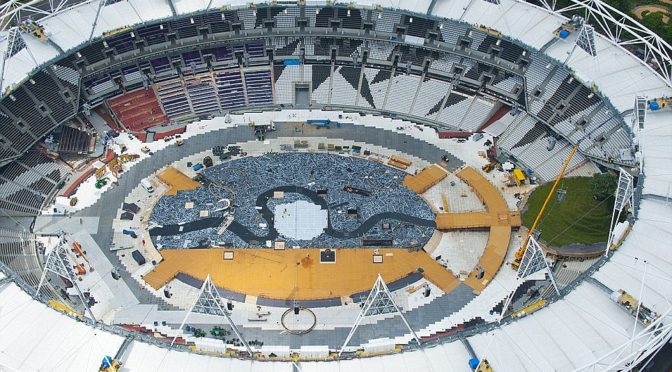 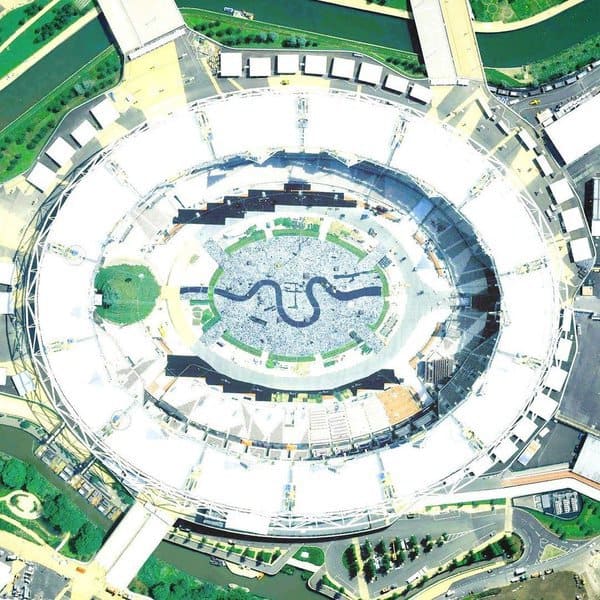 A lot of people did not notice it at the time. Heck, even I did not notice it in the moment. But what was that on the stadium floor during the 2012 Olympics Opening Ceremonies in London… after they took up the turf masquerading as a ‘green and pleasant land’? Why is was none other than the space syntax model of London itself! Pretty cool, if you ask me. See a beautiful aerial photograph of the space syntax model on the stadium floor during rehearsals below, courtesy of The Sun above.

Read more about it here at The Daily Mail. 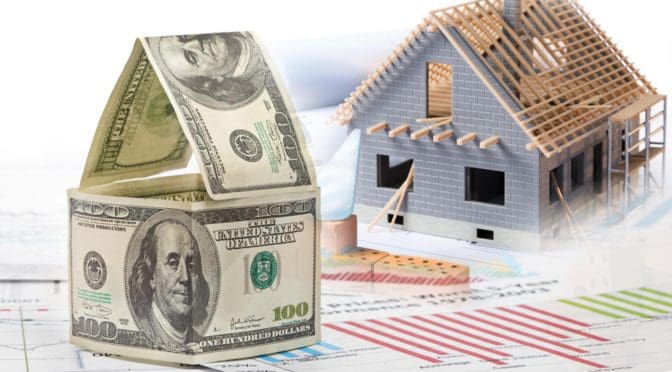 “What’s more, dozens of zombie home builders and other serial money-losers will stake similar claims (of profit) in coming months, in a cash scramble that could cost the government more than $50 billion.”

You really can’t make up these examples of crony capitalism.

Link to the full article: http://money.cnn.com/2010/01/07/news/companies/lennar.taxes.fortune/index.htm.