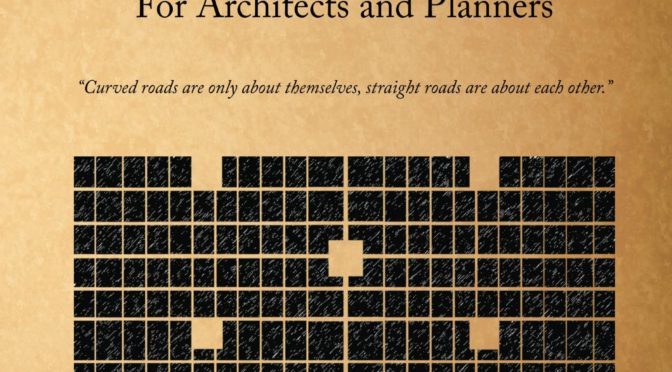 A new version of Poor Richard, An Almanac for Architects and Planners (Volume 1) specifically tailored for Kindle devices is available for purchase from the Kindle Store. Be sure to check the online store in your country/currency (USA store available below).

Poor Richard, An Almanac for Architects and Planners (Volume 1) collects together commentary, proverbs, and witticisms that originally appeared via The Outlaw Urbanist. Drawing inspiration from American Founding Fathers, Benjamin Franklin and Thomas Jefferson, as well as many others, author Mark David Major crafts anew a series of astute observations, common sense proverbs, and general rules of thumb for anyone interested in the architecture, urban design and planning of our cities. Often eloquent, occasionally biting, and always insightful, these witticisms offer a valuable resource for the entire year, daily reminders for everyone involved in the building of our cities of their better angels and warning them against the worse demons of human nature. 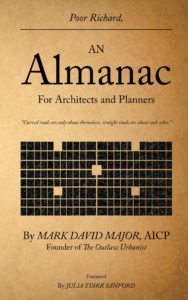 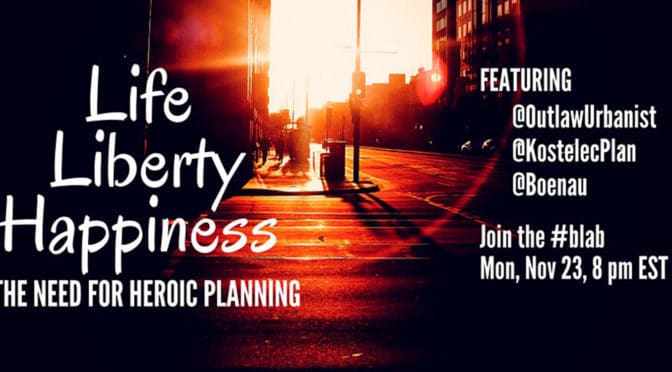 The content is pretty wide open though it will tend to focus on what is wrong with our current development practices. We will be able to answer your questions and, hopefully, have a pretty good debate.

You can subscribe to the broadcast on Blab here. 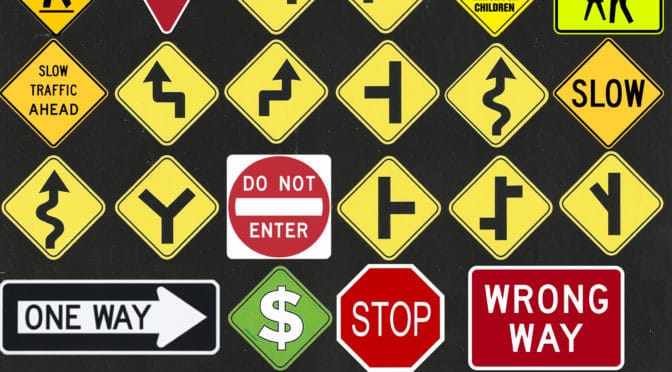 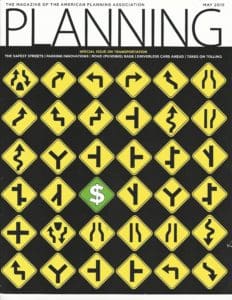 Observations on the May 2015 issue of Planning Magazine.

1.  I cannot believe the cover of this Special Issue on Transportation from Planning: The Magazine of the American Planning Association. The message could not be any clearer:

At first, I thought – finally – APA has developed a satirical perspective on its own profession. Yeah, that was wishful thinking. The cover is insidious, especially given the contrary content of this month’s issue on road design, reduced parking requirements, etc. Let’s ‘fix’ this cover. 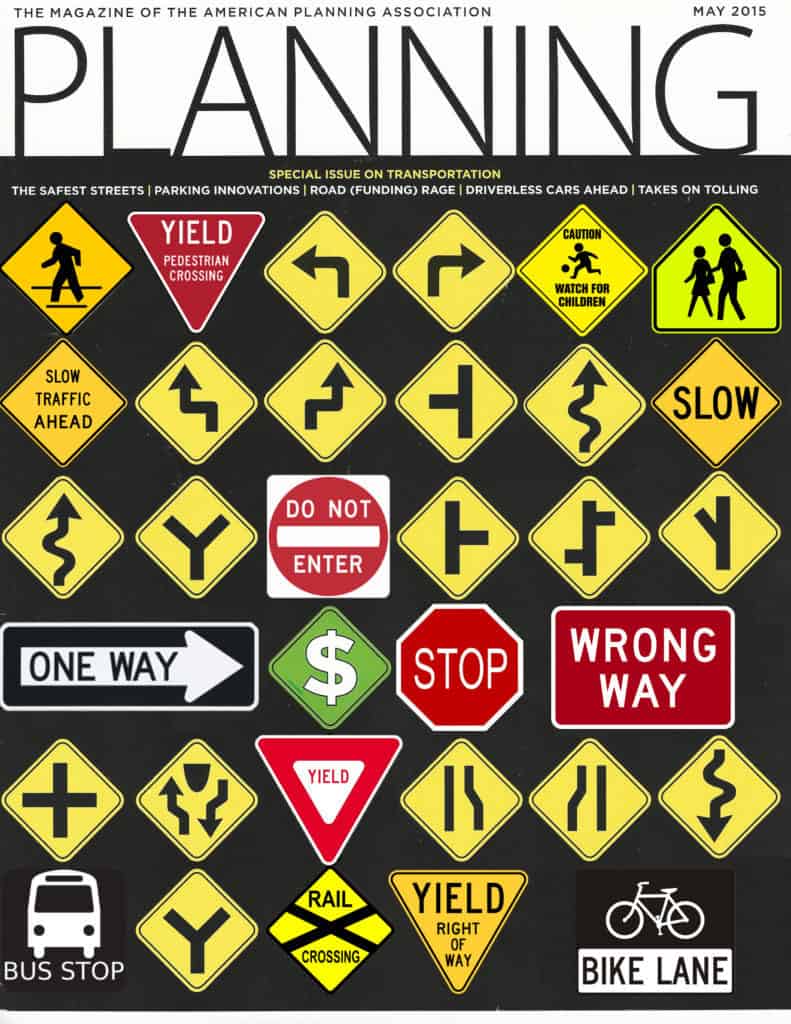 2.  “The Mathematics of Urban Productivity” (pp. 9) has an exciting and really important finding buried in the text. “Human settlements are, first and foremost, social networks embedded in space (our emphasis),” wrote Scott Ortman, assistant professor of anthropology at the University of Colorado-Boulder in a paper published in Science Advances about a study of productivity in the Aztec city Teōtīhuacān (modern day Mexico City), “the productivity of cities depends… on their role as containers for social interaction.”

3.  Despite (seemingly) editorial efforts to change the emphasis to police enforcement from road design, the message of “The Safest Streets: Vision Zero aims to eliminate all traffic fatalities” by Jay Walljasper (pp. 14) still comes through loud and clear. “Research shows that lowering a speed limit without other improvements like road design changes or improved police enforcement doesn’t work to slow traffc – it’s the roadway design (our emphasis) that affects the speed” (Charlie Zegger, UNC Pedestrian and Bicycle Information Center). It’s not an enforcement problem, it’s a design problem. This provides an especially galling contrast compared to the “pro-car, make money” message of this month’s Planning Magazine cover. Two steps forward, one step back.

4.  Another good article “Releasing the Parking Brake on Economic Development” by Brian Canepa and Joshua Karlin-Resnick (pp. 22). “A recent study by the Transportation Research Board found that parking was oversupplied in mixed use district by an average of 65 percent.” It’s not only in mixed use districts and you don’t really need a study to see the obvious, just open your eyes and look. Accommodating parking for 2-3 days of the year (shopping days before Christmas) is just stupid. The example cited in Sacramento makes a clearcut case of how the real problem is created and perpetuated by the regulatory regime itself.

5.  The logical conclusion of the above article and Donald Shoup’s excellent “Putting the Cap on Parking Requirements” article is the Buffalo model: complete eradication of minimum parking requirements in regulatory codes and allowing the market to determine what is needed on a case-by-case basis. The planning profession is not ready to adopt such a radical approach but they better start getting ready.

6.  “Road (Funding) Rage” by Jon Davis – in combination with the insidious cover – reveals the real agenda of the American Planning Association and American Association of State Highway and Transportation Officials (AASHTO), which is organizations greedily sucking at the teat of the government (preferably Federal but State and local will do as well). Approximately one-third on the content (excluding advertisements) in this special issue is dedicated to funding, taxes, and cars. 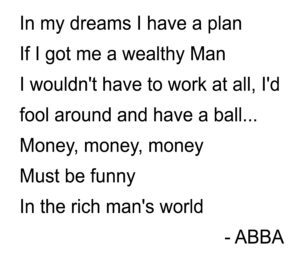 7.  “Towards a grounded theory of sustainable zoning” by Reid Ewing from the University of Utah in the Research You Can Use section advocates the concept of grounded or qualitative theory, which is really just normative theory because it is not testable or refutable, meaning it’s not theory at all in the scientific sense of the word. For normative theory, see Modernism planning.

8.  It’s hard to know where to begin with Elizabeth Wood’s Viewpoint Article, “Celebrity Culture Meets Planning Culture”. I am guessing People Magazine passed on this article. According to Wood, Idina Menzel (the “the one and only, Adele Dazeem”, per John Travolta) plays a planner in the Broadway musical If/Then, she sang on Disney’s Frozen and has “millions of young Frozen fans”, ergo we can expect a “bumper crop of new planners” in the next generation. I guess I can see her point. I mean Madonna did play Eva Peron in Andrew Lloyd Weber’s Evita in 1996, Madonna had millions of young fans at the time, and now we are inundated with a bumper crop of ambitious young women who want to be the second wife of South American oligarchs… And that is how you do satire, APA *mic drop*.

Planning Naked is an article with observations and comments about a recent issue of Planning: The Magazine of the American Planning Association. 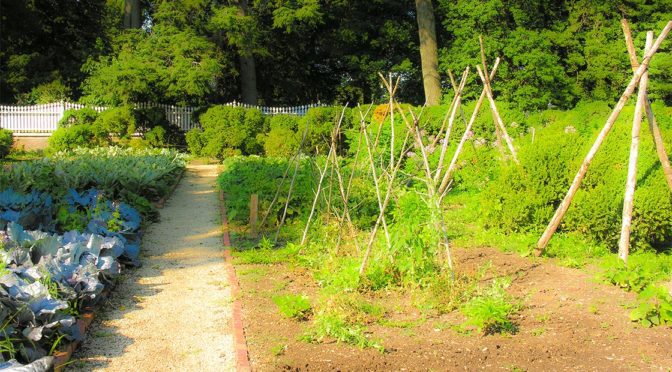 Dispatches from Dawn in the USA | via the Original Green
by Steve Mouzon, AIA, December 8, 2014

Steve Mouzon, AIA discusses the influence of Benjamin Franklin within the context of the release of Poor Richard, Another Almanac for Architects and Planners by Mark David Major.

“Ben Franklin was a Twitter master a quarter-millennium before the medium, as I wrote in the Foreword to Mark Major’s excellent new book Poor Richard, ANOTHER Almanac for Architects and Planners, but Franklin was also more skilled at describing true Original Green sustainability than anyone alive today. What follows are some of my favorite nuggets of Poor Richard wisdom.”

Read the full article here: Dispatches from Dawn in the USA | the Original Green | Steve Mouzon

Download the full article here: Dispatches from Dawn in the USA | the Original Green | Steve Mouzon 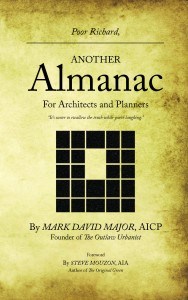 Poor Richard, Another Almanac for Architects and Planners (Volume 2)
by Mark David Major
Foreword by Steve Mouzon
140 pages with black and white illustrations.

Available in print from Amazon, CreateSpace, and other online retailers. Available on iBooks from the Apple iTunes Store andKindle in the Kindle Store. 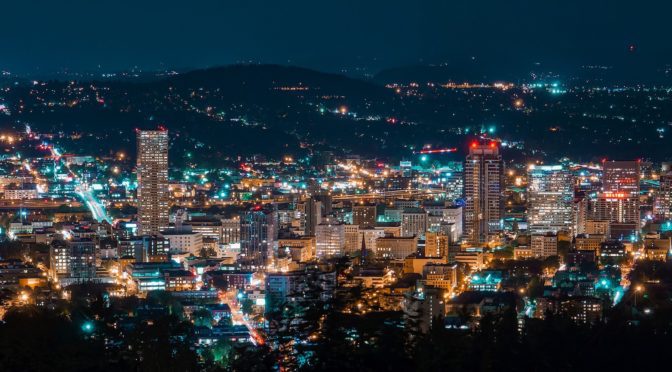 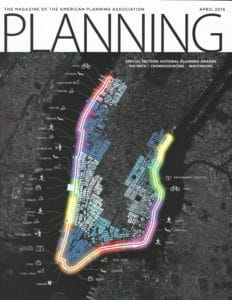 Observations on the April 2015 issue of Planning Magazine.

1. APA President William Anderson in the Guest Column on page 5 says “that planning is relevant, alive, and needed now more than ever.” Planning, generic? Instead, what about saying we need good planning now more than ever? Bad planning is a waste of time and effort. The good intentions of “dedicated and earnest planners” are not enough. The road is Hell is paved with good intentions. Leadership is about setting a high standard for the profession and advocating to achieve that standard. Planners should always lead, not only “sometimes”. Let’s stop playing small ball with our language.

2. Man, there are a LOT of advertisements in this month’s issue. It’s like flipping through pages and pages of Cosmopolitan in search of  that interview with Anna Kendrick, which is the only reason you bought the issue…. oh, OK… and the quiz about improving your sex life.

3. Zones for Economic Development and Employment (ZEDEs) are discussed in the article “Honduras Tries Charter Cities”. This is an intriguing concept that appears to merge early 20th century New Towns in the UK with 19th century company town models in the USA into a new 21st century application. The article admits the track record of ZEDEs around the world is a mixed bag. Like everything else, the devil is in the details.

4. Pamela Ko and Patricia Salkin discuss incorporating the Health Impact Assessment (HIA) into land-use planning decisions in the “Legal Lessons” article. The word ‘walking’ is oddly absent from their article, which suggests HIAs (and the authors do discuss in terms of) are really a tool of exclusionary zoning. Let the buyer beware. 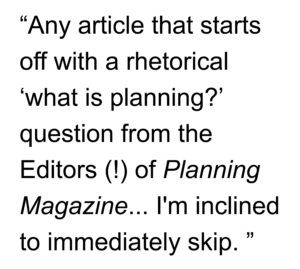 5. Goodness, that looks like a space syntax model of Portland, Oregon on page 27 in the “Big Data” article!!! I don’t think it is but it looks like someone has been reading about space syntax.

6. Any article that starts off with a rhetorical “what is planning?” question from The Editors (!) of Planning Magazine (page 36, 2015 National Planning Awards), I’m inclined to immediately skip. However, I glanced through the award winners and found them – for the most part – underwhelming.

7. C. Gregory Dale’s “Findings of Fact for Planning Commissioners” article presents an off-putting straw man public hearing scenario to jump into some otherwise good points. A good planning staff writes the finding of facts for approval AND denial on behalf of the Planning Commission. It’s the single most important tool that planning staffs have in their toolkit to guide their commissions to the best planning decisions.

8. Review of Poor Richard: Another Almanac for Architects and Planners by Mark David Major on page 69-70. Awesome sauce! This review is decidedly neutral but that’s OK since Volume 2 has more content about architects, architecture, and building than urban planning compared to Volume 1.

9. Jon Arason’s Viewpoint article about “The Planner’s Lament: Night Meetings” is only funny because it is true! I once did the same calculation about the amount of additional hours of unpaid work at night meetings while serving as a Senior Planner for a local Florida county. The revelation sent me straight into the private sector for good!