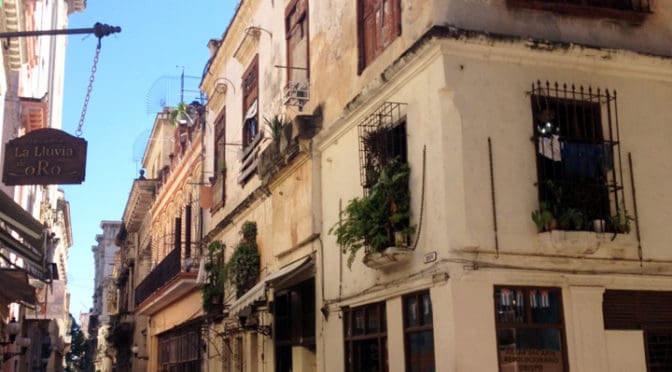 Part 2 of a brief photographic essay of architecture and urban space in Havana, Cuba courtesy of Concrete Blonde. Again, the urban vocabulary of Havana is remarkably consistent: the street life of urban balconies, the use of balcony gardens in softening the urban streetscape, rooftop terraces, abundant use of urban sidewalk arcades, and the use of color. 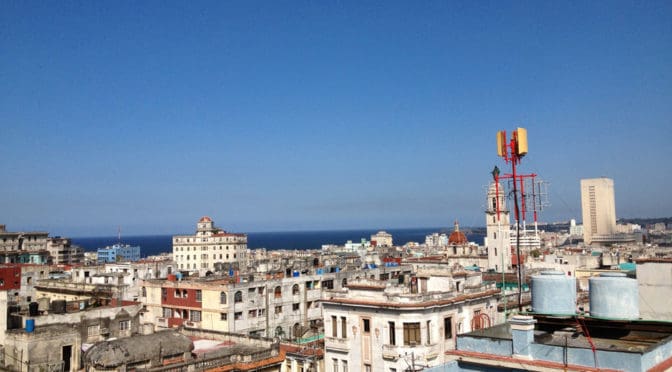 Part 1 of a brief photographic essay of architecture and urban space in Havana, Cuba courtesy of Concrete Blonde. In terms of urbanism, the most interesting aspects of these photographs are: the street life of urban balconies, the use of balcony gardens in softening the urban streetscape, rooftop terraces, abundant use of urban sidewalk arcades, and the use of color. In terms of political ideology, it seems symbolic that many of the cars (most likely of origin in Eastern Europe) and best architecture (at least, in terms of design if not actual age) predates the Communist Revolution lead by Fidel Castro in 1959; make of that what you will. However, the result is an urban treasure trove awaiting re-discovery and historic rehabilitation.

Stay tuned for Part 2 of the Havana, Cuba Photographic Essay coming soon on The Outlaw Urbanist! 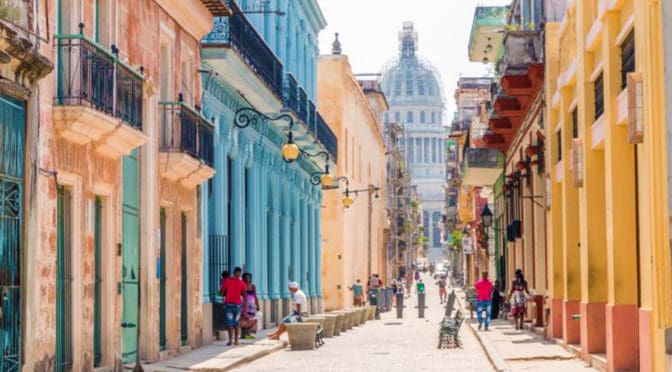 An illustrative history of town plans for Havana, Cuba sent to The Outlaw Urbanist, courtesy of Concrete Blonde. 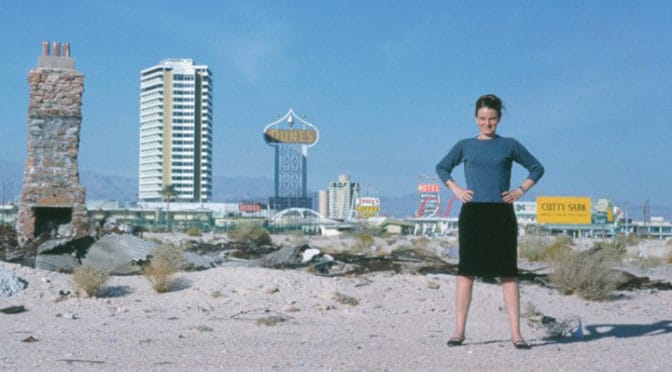 Concrete Blonde sent a link to the below editorial in The Architectural Record by its Editor in Chief, Cathleen McGuigan, as a follow-up from our earlier post on The Outlaw Urbanist (Comment: We need women designing buildings). Concrete Blonde thinks Ms. McGuigan made some good points and added to the discussion about women in architecture.

For several months now, we’ve been reaching out to architects to talk about the status of women in the profession. Even before the Architects’ Journal published its scathing survey of how women in architecture are treated in the U.K.—and well before two students at Harvard’s Graduate School of Design launched their petition to pressure the Pritzker Prize committee to recognize architect and planner Denise Scott Brown, who was excluded from the 1991 award bestowed on her partner, Robert Venturi—we had begun to report on the inequities that persist in the field. What was striking was that many women didn’t want to talk on the record about their concerns. They just want their work acknowledged—and please, they said, we’re “architects,” not “women architects.”

Denise Scott Brown should (have) be(en) recognized with Robert Venturi for the 1991 Pritzker Prize. However, the ongoing debate on this subject is frustrating. It is frustrating because the ideal of gender equality expounded for the architectural profession – and, by implication, other professions –  too often relies on arguments that are, at best, manifestly superficial and, at worse, reinforce the gender stereotypes underlying the problem. 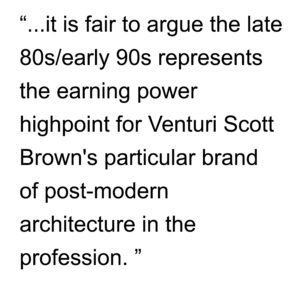 This particular debate has not been helped by public comments (perhaps taken of out context) by both Robert Venturi and Denise Scott-Brown that do not ‘hold water’ in explaining why she was not recognized with Venturi for the Pritzker Prize in the first place. For example, in the above CNN article, Scott Brown is quoted as saying””we could not afford to pass up the Pritzker Prize for the sake of our fledgling firm.” It seems far-fetched to describe Venturi Scott Brown and Associates as a “fledgling firm” in 1991. A Wikipedia listing of their selected works identifies four major projects in 1991, more than any other year listed over a 44-year period (Source: Wikipedia). Quite the opposite, in fact, since it is fair to argue the late 80s/early 90s represents the earning power highpoint for Venturi Scott Brown’s particular brand of post-modern architecture in the profession. Venturi and Scott Brown’s public comments suggest they are protecting somebody for the initial oversight, either Venturi himself or The Hyatt Foundation, which organizes and awards the Pritzker Prize.

However, this is a side issue to larger problems: namely, the promotion of talent, in general, and insidious effects of gender discrimination, in particular, in the architectural profession. Marika Shioiri-Clark and John Cary’s CNN opinion piece manages to negatively typify these problems at a gross level while still being right in some of its details. First, we do not need “women designing buildings.” This is the same superficial argument we have heard from feminists for decades; namely, if we only elected women to political leadership we would have world peace. Female political leaders have proven time and time again over the last 40 years that equality has nothing to do with their gender and everything to do with how women can be equally inspirational, vicious, divisive and (in)competent as their male counterparts. Instead, what we need are talented people (women and men) designing buildings. We should have zero interest in promoting mediocre architects, regardless of their gender. 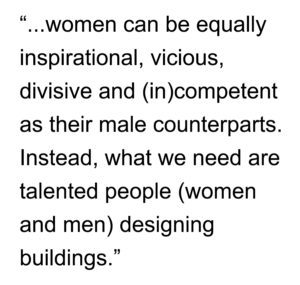 As Shioiri-Clark and Cary correctly point out, female architectural students regularly outperform their male counterparts in school, substantially so in our experience. If the profession truly prized and promoted talent, female architects would naturally rise to the top because there lies the talent (sorry, male architects but it is true). However, the profession is still trapped within the grips of the (often self-manufactured) ‘myth of architectural genius’. This practice prizes the architect’s ability to self-promote and network that myth in the profession, popular media, and books. In doing so, the superficial is valued over the substantive in architecture (very post-modern, indeed). Unfortunately, the profession’s manifest failure to promote talent also sweeps women architects out of the limelight as a result. Once you get pass the names Zaha Hadid, Denise Scott Brown and Elizabeth Plater-Zyberk, it’s damn difficult to name any superstar women architects. It’s even worse for planners (Jane Jacobs was an economist, so don’t even try it). However, “The fault, dear Brutus, is not in our stars, But in ourselves.” Our vision is my-opic (literally and metaphorically).

Shioiri-Clark and Cary also correctly call out the Architectural Registration Exam (ARE) process for institutionalizing discriminatory practices against women but then incorrectly name the reason (i.e. financial). The real discriminatory practice against women associated with the ARE lies in the limit to a 6-month reporting period for the Intern Development Program (IDP). When a woman temporarily leaves the workforce to bear a child, the typical disruption to her career is much longer than 6 months. Sure, there are some ‘super’ women out there in the profession, for whom this is not the case. They may work until 4-6 weeks before giving birth and return to work 3-4 weeks afterwards. But, more typically, the disruption to a woman’s career extends over a two-year period from the early decision-making stages of pregnancy to the early childhood-raising stages after birth. Let’s be honest, given the supreme and unchallenged role that mothers play in raising their children (especially compared to fathers), the real disruption is 18 years… or even a lifetime. In any case, the one thing the profession could do today to promote gender equality and enable more women to become registered architects is extend the reporting period for IDP to two years.

In their opinion piece, Shioiri-Clark and Cary then transition to the visibility of women architects in the profession. If we focus the question on the promotion of talent instead of valuing the promotion of self, then this is the same problem, i.e. the crème will rise to the top if we value talent.

At this point, the Shioiri-Clark and Cary article takes a mind-bogglingly bizarre turn to discuss “Architect Barbie”, which manages to be both comical and hypocritical, thereby undercutting every point they are trying to make in the article. Perhaps it’s true that Shioiri-Clark and Cary only do this to spark controversy and drive visitor hits on the article. However, when it comes to the larger question of gender discrimination, it’s hard to get more inconsequential than discussing dolls within the context of a serious subject.

Shioiri-Clark and Cary close the article by further expounding further on the ‘world would be a better place if it was run by women’ argument/fallacy. It would not be any different except women would more equally share in the blame for our problems as well as the praise when those problems are solved. 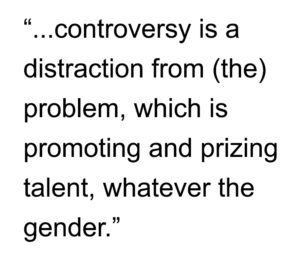 That is true equality. So give Denise Scott Brown her share of the 1991 Pritzker Prize but women and men should not make the mistake of thinking it addresses the real problem in the profession. At this point, the Pritzker Prize controversy is a distraction from that problem, which is promoting and prizing talent, whatever the gender. If the playing field was level in this regard, there is little doubt women would rise en masse to the top of the profession… and our built environment would, indeed, be better served.