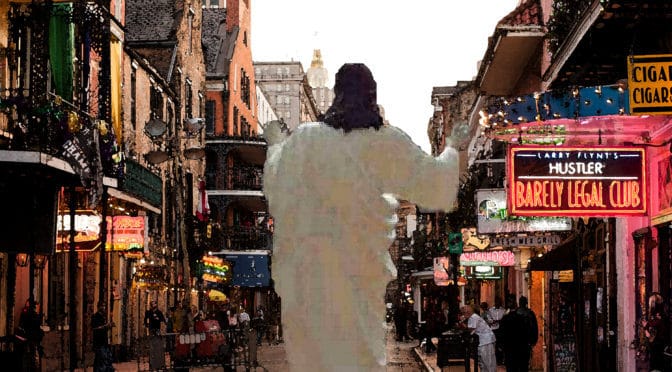 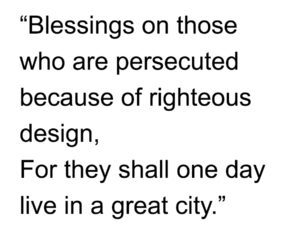 Blessings on the placemakers,
For they shall be called the children of the city.
Blessings on those who are persecuted because of righteous design,
For they shall one day live in a great city.
Blessings on you when people insult you, persecute you, and falsely say all kinds of evil against the city.
Rejoice and be glad because great are your rewards in the city, for in the same way they persecuted the prophets who were before you.
You are the salt of the Earth but if the salt loses its saltiness, how can it be made salty again? It is no longer good for anything, except to be thrown out and trampled over by the automobile.
You are the light of the city. A city built on a hill cannot be hidden. Neither do people light a lantern and hide it. Instead they put it on a post in the street, and it gives light to all pedestrians on that street. In the same way, let your city lights shine before others, that they may see your good streets and glorify the greatness of your city.

Moreso is a series of short ruminations or thoughts of the moment, usually of less than 500 words, from The Outlaw Urbanist. 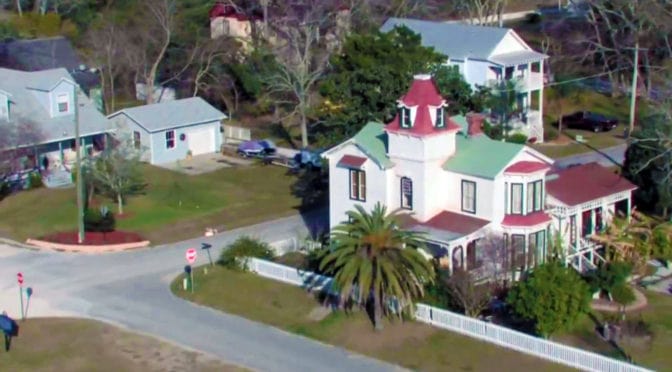 Old Town Fernandina is located on the northern end of Amelia Island in Florida, immediately south of the border with the State of Georgia, and about 40 miles north of Downtown Jacksonville. Old Town Fernandina was the last Spanish settlement founded in North America based on the Laws of the Indies and, as such, is listed on the National Register of Historic Places. Old Town is located on an inlet to the St. Mary’s River and Amelia River from the Atlantic Ocean, which offered (and still does) a generous deep-water port on the Atlantic coast for fishing and trade. Fernandina Beach grew southward with the construction of the David Yulee cross-state railroad from Cedar Key-to-Fernandina Beach in 1861 so the center of retail/commercial activity in Fernandina Beach shifted to what is now called “Downtown Fernandina.” Downtown Fernandina is also listed on the National Register of Historic Places. Because of this, Old Town Fernandina is probably the ‘purest’ example of a town founded based on the Spanish Laws of Indies remaining in North America. Fort San Carlos used to be located to the west of Plaza San Carlos (open space on the left of Old Town) but two-thirds of the grounds on which the fort formerly sat has been lost due to soil erosion.

The earliest plat for the town (north is to the left in the above image) shows a regular grid layout ‘fitted’ to the shape of the topography of this peninsula in 4 x 4 block layout (5 x 5 street layout). The topography interrupts this geometric logic at the southeast (above, upper right-hand corner) and the northwest (above, lower left-hand corner) though the plat clearly shows the intention to in-fill to the northwest at the water’s edge in order to generate rectangular lots. Instead of a central plaza, the plaza in Fernandina was shifted to the what would become the water’s edge after the ‘disappearance’ of San Carlos into the river at the western edge of the plan (above, bottom edge of the drawing). The layout of lots within each block is also interesting with larger lots ‘internalized’ within the blocks and smaller lots ‘externalized’ along the eastern and western edges of the blocks. The exception is lots on the northern and southern edges of the blocks (identified as #1 and #2 in this plan) immediately adjacent to the plaza. 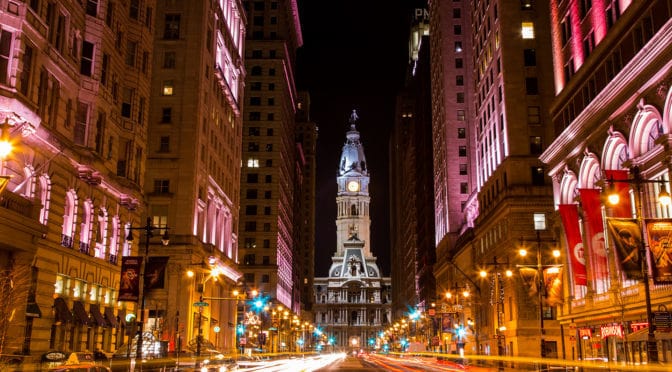 Philadelphia is the largest city in the Commonwealth of Pennsylvania and the fifth-most populous city in the United States, with an estimated population of 1,567,442 and more than 6 million in the seventh-largest metropolitan statistical area, as of 2015. Philadelphia is the economic and cultural anchor of the Delaware Valley—a region located in the Northeastern United States at the confluence of the Delaware and Schuylkill rivers with 7.2 million people residing in the eighth-largest combined statistical area in the United States. In 1682, William Penn, an English Quaker, founded the city to serve as capital of the Pennsylvania Colony. Philadelphia played an instrumental role in the American Revolution as a meeting place for the Founding Fathers of the United States, who signed the Declaration of Independence in 1776 and the Constitution in 1787 (Source: Wikipedia).

There are two remarkable yet seemingly contradictory things about the urban pattern in Philadelphia; in particular, within the bounds of William Penn’s original 1682 plan for the city. First, is the remarkable degree to which the plan has changed over more than 330 years of development. Most often, this has occurred through the manipulation of block sizes (upsizing and subdividing of urban blocks) even if the Vine Street Expressway (Interstate 676) and Delaware Expressway (Interstate 95) ringing the bounds of the original plan might, at first glance, draw the eye to these large-scale interventions. Second, is the remarkable degree to which the integrity of the original Penn plan for the city has endured literally thousands of small-scale interventions over more than 330 years of development. Taken together, this points to something even more remarkable, which is the instrumental power of the regular grid to be simultaneously flexible for and resilient to change over time. 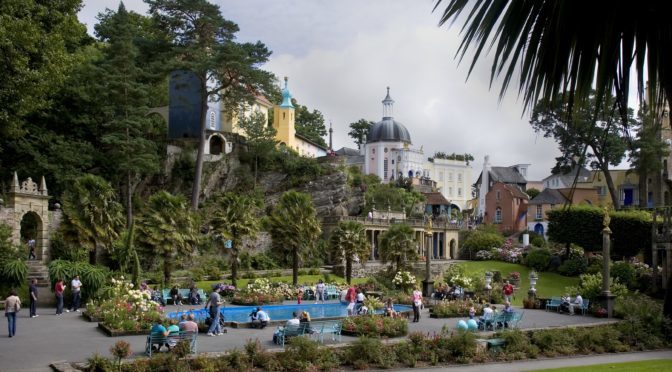 “But still we walk into the valley,
And others try to kill the inner flame,
We’re burning brighter than before,
I don’t have a number, I’M A NAME!”
— Back in the Village, Iron Maiden

The grounds of the Hotel Portmeirion, a resort near Penrhyndeudraeth in North Wales, famously served as the doppelgänger for “The Village” in the 1960s television series, The Prisoner. Portmeirion is a popular tourist village in Gwynedd, North Wales. It was designed and built by Sir Clough Williams-Ellis between 1925 and 1975 in the ‘style’ of an Italian village. From 1,500 feet above, “The Village” appears relatively unchanged some forty years later.

Interestingly, the layout of Portmeirion appears more akin to the layout of a theme park, zoo, or even a modern golf course. There are few distinctive features composed in plan in a manner consistent with traditional settlement – Italian or otherwise – or a modern suburban forms. Instead, the layout is composed of a series of medium- and large-scale loop roads; the largest one being further to the east associated with Castell Deudraeth, which is a restored Victorian building and gardens that re-opened as a hotel in 2001. The most distinctive of these roads incorporate the grounds of the Hotel Portmeirion itself, forming an U-shaped semi-circular vehicular road in relation to the Afon Dwyryd shoreline in the south. This means the most accessible routes for pedestrians (aka tourists) tend to traverse (or, at least, want to) diagonally across the large green spaces of Williams-Ellis’ plan but within the limitations imposed its hard and landscaping features, i.e. paved areas, reflection ponds, etc. Be seeing you. 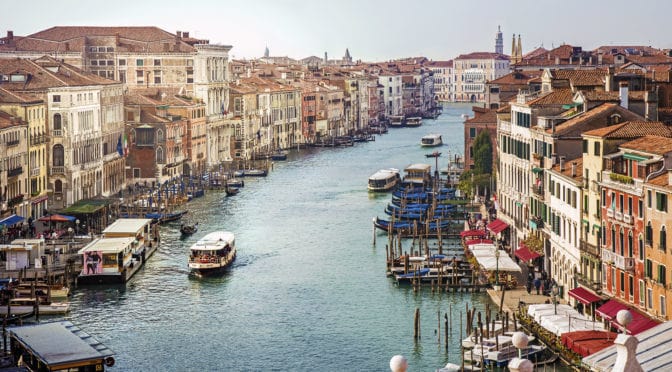 Venice is a city in northeastern Italy and the capital of the Veneto region. It is situated in a group of 117 small islands that are separated by canals and linked by bridges. These are located in the shallow Venetian Lagoon, an enclosed bay that lies between the mouths of the Po and the Piave Rivers. Parts of Venice are renowned for the beauty of their settings, their architecture, and artwork. The lagoon and a part of the city are listed as a World Heritage Site. In 2014, 264,579 people resided in Comune di Venezia, of whom around 55,000 live in the historic city of Venice (Centro storico). Together with Padua and Treviso, the city is included in the Padua-Treviso-Venice Metropolitan Area with a total population of 2.6 million people. Venice was a major financial and maritime power during the Middle Ages and Renaissance, and a staging area for the Crusades and the Battle of Lepanto, as well as a very important center of commerce (especially silk, grain, and spice) and art in the 13th century up to the end of the 17th century. The city is considered to have been the first real international financial center which gradually emerged from the 9th century to its peak in the 14th century, making it a wealthy city throughout most of its history (Source: Wikipedia).

Venice has been a source of fascination for centuries for a variety of reasons including, rightly so, its architecture and urban design. In many ways, Venice seems unique. Its island location seems to allow the city to operate as an ‘almost discrete’ urban system. At least, much more so than most cities. It incorporates a mix of transportation modes including pedestrian paths, a rail station, ports, and internal water navigation, e.g. the canals. Venice is an urban pattern ‘frozen in time’ because of historical conservation efforts during the 20th century, almost as much – if not more so – for maintaining the delicate man-made ecosystem of Venice due to subsidence (i.e. gradual lowering of the city into the sea) as for architectural and urban design aesthetics. Venice is ‘frozen’ into its deformed grid layout much in the same manner as the Pilot Plan of Brasilia is ‘frozen’ in its modernist, geometric layout.

Nonetheless, there are many interesting things to note. The intricacy of the deformed grid layout indicates a well-defined and easily-understood neighborhood pattern in Venice, despite the lack of a readily-apparent geometry in the ‘bird’s eye view’ of the layout. Block sizes appear larger and more geometrically regular at the outer edges of the island (for example, to the north at the water’s edge) and smaller towards the center of the island (for example, at the bend in the Grand Canal). Venice’s street system also seems to have evolved over time to privilege the edge-to-edge relationship from one shoreline to another with longer, straighter streets intersecting these streets for transverse movement, especially closer to the outer edges of the island; for example, to the north and south. This leaves the patterning of the center-to-edge relationship for movement in the Venice urban network to the canal system itself, especially in the relationship between the rail station located at the water’s edge to the west and the Grand Canal itself. Collectively, this seems to represent something of an European inversion (and a very particular one at that) in formal terms compared to the suburban street network pattern of post-war American cities (such as Las Vegas or Phoenix), where very long edge-to-edge, super grid streets are geometrically determined by the cardinal directions and interstitial streets tend to be shorter by comparison. Nonetheless, the dynamic of Venice’s train station in relation to this urban pattern is somewhat replicated by the airport in the American model.