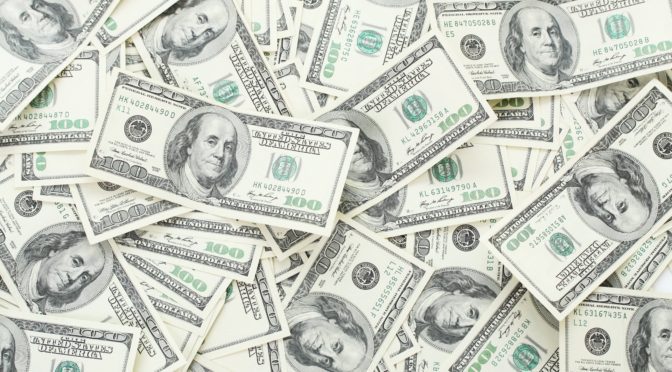 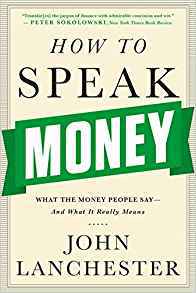 REVIEW
How to Speak Money: What the money people say… and what they really mean
by John Lanchester

John Lanchester’s How to Speak Money: What the money people say… and what they really mean is a worthwhile read though the whole adds up to somewhat of a mixed bag. The first chapter, “The Language of Money” is a fabulous, broad-based read, mostly focused on telling the story of economics as a field and topic of study. The middle definition section, “The Lexicon of Money” is mostly thorough and informative but a lot of readers (for example, architects, urban designers, urban planners) will find some definitions more useful than others based on their own interests and life experience. This really isn’t Lanchester’s fault; it’s just the ‘nature of the beast,’ as some might say. The “Afterword” is really problematic as Lanchester tries to pull it all together into a more widespread, sweeping view of where we have been and where we are going after the Great Recession. In doing so, he strains to debunk what he describes as the Neo-liberalism economic policies of the last 30 years (what most people know as supply-side economics or Reaganomics) on the basis of inequality (i.e. gap between rich and poor). At the same time, Lanchester heralds the remarkable progress of developing and emerging markets over the same time period, especially in improving child mortality and education rates, lifting people out of poverty, etc. (i.e. reducing inequality). However, to accept Lanchester’s argument, the reader has to assume that these simultaneous events over the last 30 years are utterly disconnected, occurring in a vacuum independently of each other. It seems far more plausible that Reagan and Margaret Thatcher’s promises to the middle/lower classes of a ‘trickle down effect’ that lifts all boats has not been realized in the developed Western societies such as the United States and United Kingdom but, through the mechanism of globalization, manifested on a worldwide scale in these emergent markets. 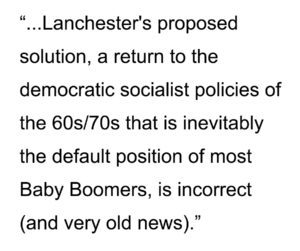 This means Lanchester’s proposed solution, a return to the democratic socialist policies of the 60s/70s that is inevitably the default position of most Baby Boomers, is incorrect (and very old news). As I recall, Reagan/Thatcher never supported the concept of near-monopolies as part of their broader economic strategy, which has, in fact,  emerged in modern corporatism of the Western societies over the last 2-3 decades. This suggests that economic model we should be looking towards for a correction in the obvious abuses of the Neo-Liberal economic model (see bank fraud/credit crunch of the Great Recession) lies in the early 20th century ‘trust-busting’ model of Teddy Roosevelt. In this sense, the “Afterwood” serves its purpose by forcing anyone with a basic understanding of history and economics to draw to their own, more rational conclusions in order to reconcile the inherent contradictions of Lanchester’s argument. How to Speak Money: What the money people say… and what they really mean is worth the read but it should be read thoughtfully, not blindly. Grade: 3 1/2 stars

You can purchase How to Speak Money: What the money people say… and what they really mean on Amazon here. 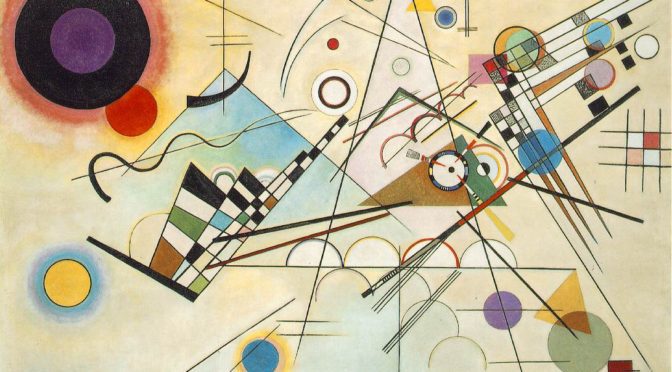 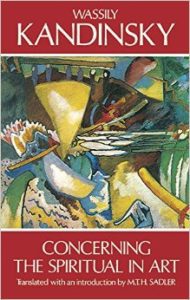 FROM THE VAULT
Concerning the Spiritual in Art by Wassily Kandinsky

“It is the conviction that nothing mysterious can ever happen in our everyday life that has destroyed the joy of abstract thought.”

Students and aspiring artists will find the entirety of Concerning the Spiritual in Art by Wassily Kandinsky a fascinating read. Throughout, Kandinsky attempts to lay out a theory of art through analogy to the composition of music. In doing so, Kandinsky is explicitly seeking to promote the inner expression or spirituality of the artist in the creation of a truly abstract art. For architects, urban designers, and urban planners, it is likely that they will find particular sections of Concerning the Spiritual in Art more useful to their own area of interest than others in the book; in particular, page 21-45 on the psychological effect and language/form of color. As might be expected from an artist of Kandinsky’s standing, he has some very interesting and insightful ideas about the use and mixture of colors in composition. It seems like some of these ideas might prove useful application in the built environment, especially for those who find themselves constrained in an oppressive world of beige. Certainly, the use of color in the built environment appears to be a poorly understood subject, especially in the United States. It couldn’t hurt for some professionals to better understand the topic. 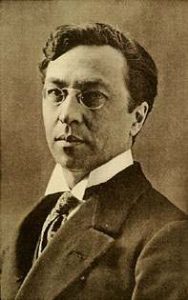 About Wassily Kandinsky
Wassily Kandinsky (December  16, 1866 – December 13, 1944) was an influential Russian painter and art theorist. He is credited with painting one of the first purely abstract works. Born in Moscow, Kandinsky spent his childhood in Odessa, where he graduated from Grekov Odessa Art school. He enrolled at the University of Moscow, studying law and economics. Successful in his profession, he was offered a professorship (Chair of Roman Law) at the University of Dorpat. Kandinsky began painting studies (life-drawing, sketching and anatomy) at the age of 30. In 1896, Kandinsky settled in Munich, studying first at Anton Ažbe’s private school and then at the Academy of Fine Arts. He returned to Moscow in 1914 after the outbreak of World War I. Kandinsky was unsympathetic to the official theories on art in Communist Moscow and returned to Germany in 1921. He taught at the Bauhaus school of art and architecture from 1922 until the Nazis closed the school in 1933. He then moved to France, where he lived for the rest of his life, becoming a French citizen in 1939 and producing some of his most prominent art (Source: Wikipedia).

You can purchase Concerning the Spiritual in Art by Wassily Kandinsky on Amazon here. 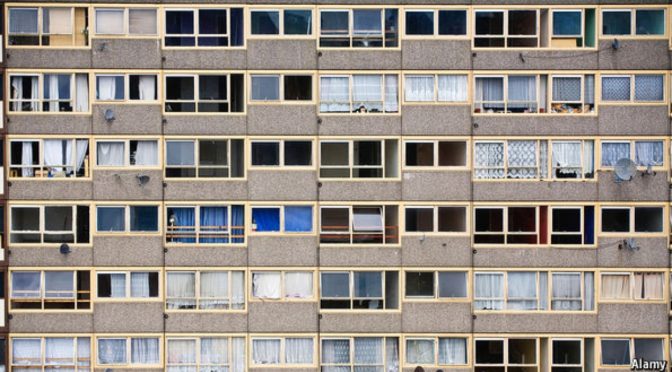 Interesting article in The Economist about social housing in Britain.

“Research by Bill Hillier, a professor of architecture at University College London, suggests that the design of housing estates can contribute to social problems. He says there can be too many walkways, resulting in empty spaces where criminals can lurk. In a paper with Ozlem Sahbaz, based on five years of crime data in one London borough, he concludes that a higher density of people helps to deter crime (high-rises are often not as densely populated as medium-rise blocks built closer together), and that integration with streets, even full of strangers, is safer.”

Read the full article here: Back to the street | The Economist 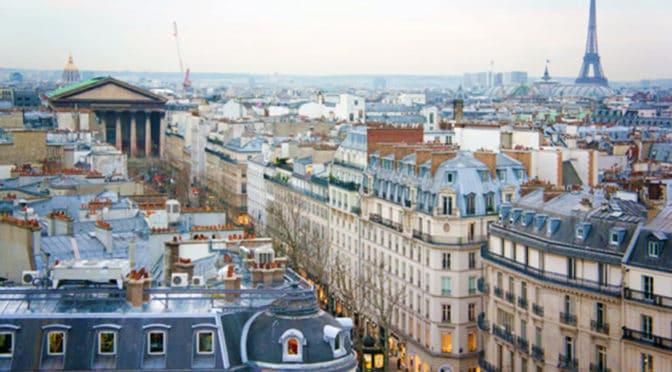 Excellent article about  the push to “reinvent Paris” by Steven W. Semes in The New Criterion.

So what is driving this push for tall towers in a low-rise city that is universally admired as the outstanding model of what a city can be? Why this “explicit repudiation of previously successful typologies,” as the CEU report describes it? The answer lies in contemporary architectural philosophy and its demand that buildings and cities be “of their time”—that is, conform to the aesthetic fashions of the moment—whatever the consequences for the character of the place or the quality of life of the citizens. This claim presupposes that “our time” is determined by historical forces—the Zeitgeist—that cannot be denied or reversed except at the risk of being bypassed by “history.”

Reading the full article below.

Preserving the city of tomorrow by Steven W. Semes | The New Criterion