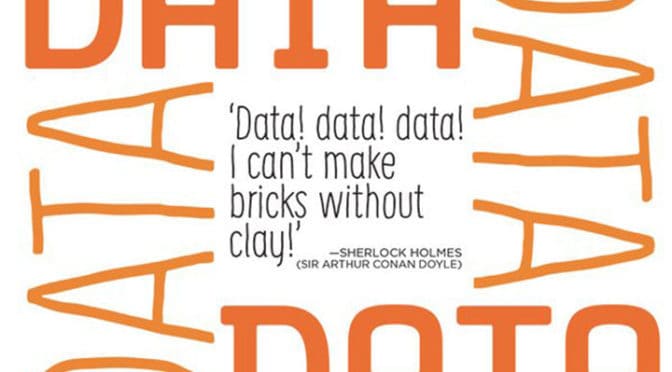 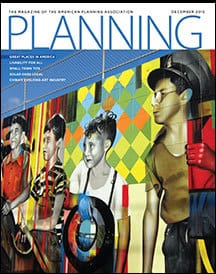 10 Strategies for Livable Communities (page 24) as part of the Livability for All article (page 21-24)
This article follows up on AARP’s creation of a Livability Index for senior citizens. You may recall from a previous edition of Planning Naked that I pointed out one of the worst ‘suburban sprawl hell’ areas of Jacksonville, Florida scored a 50 on AARP’s Livability Index, suggesting the criteria was suspect at best. What is really startling about these ’10 Strategies” is the utter lack of the word ‘design’ appearing anywhere in the list. More so, it’s difficult to find anything that could be even implied to mean design as an component of livability. Indeed, most of these strategies involve ‘consultation’ and ‘competitiveness’ (i.e. economic aka making money). Just as Carly Fiorina chides Hillary Clinton by saying “flying is a activity, not an accomplishment” so APA needs to be criticized in a similar manner. 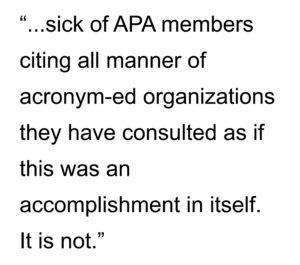 Consultation is an activity (a means to an end) and not an accomplishment in itself. Personally, I’m sick of APA members citing all manner of acronym-ed organizations they have consulted as if this was an accomplishment in itself. It is not. Poor Richard:  It isn’t the quantity of the acronyms that matter but the quality of their (letter) characters. APA members need to be careful about flying to something shiny (AARP’s Livability Index, e.g. Won’t someone please think of the old people?!?!) and applying it without thought before understanding its underlying assumptions. Count me suspicious. Based on experience, WalkScore, at the moment, seems like a more credible index than AARP’s Livability Index. Besides, AARP is composed of almost nothing but Baby Boomers these days and it’s the Baby Boomers who got us, for the most part, into this mess. Should we really trust the Baby Boomers’ interpretation of ‘livability’.

China’s Evolving Art Industry (page 35-40)
Has anyone else noticed that the most interesting and exciting developments in practice covered in Planning Magazine tend to occur in overseas countries? Does anyone think this is decidedly odd? Are Americans just not really trying when it comes to planning? Very interesting article on the emergence of creative districts in China over the last 30 years. However, the article betrays a fear of change (“commercial success prices out the pioneers”). Change is the very nature of the city. Get over it, already.

Yikes, There’s a Tourist in Town (page 41-42)
Short translation of this article for you: Planning would be so much easier if cities didn’t have people. We wouldn’t need any planning at all, or cities for that matter.

Best Practices: Using Planning Data Wisely (page 43-44)
This is a very good article by Terry Moore, Alexandra Reese and Ali Danko from ECON Northwest about the proper use of data in developing sound planning policy and regulations. The only thing that needs to be added to their list of bullet points is:

Transparency: Be clear and honest about data sources and your assumptions about that data and its collection.

I thoroughly recommend this article for everyone.

Research You Can Use: A physicist tries to solve the city by Reid Ewing (page 47-48)
I can’t tell you how refreshing it was to read Reid Ewing’s “Research You Can Use” article in this month’s issue of Planning Magazine. In it, Ewing explains why he rejected a submitted paper for a referred journal attempting to build upon Luis Bettencourt and Geoffrey West’s Urban Scaling Theory. 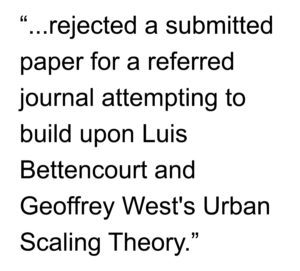 I can’t really comment with authority on the validity of Ewing’s arguments since I have not read the submitted paper in question. Of course, Ewing is correct that the larger the city, the more you have of everything including crime. The aggregated population v. crime correlation is interesting at an abstract level (and should be totally expected) but not very useful for planning policy. For that, you need the sensitive street-by-street and block-by-block modeling techniques of the urban network such as space syntax. In this way, you can demonstrate the usefulness of such correlations between population, crime, location/access, and spatial vulnerability and potential proposed design changes to address the problem. There’s a lot of good research on that front. However, what is refreshing about Ewing’s article is the transparency. It is an excellent attempt to ‘unveil’ the scientific process at work. In this sense, it is very valuable. In fact, Ewing’s article makes me wonder whether there is some inherent value in all referred publications printing short summaries by referees for all rejected papers so that the entire scientific, urban planning community can benefit from seeing the process at work. Something worth thinking about as this could be ‘a rising tide lifts all boats’ type of strategy.

Planners Library
Sounds like there are several, new books worth reading:

Our Kids: The American Dream in Crisis Hardcover by Robert D. Putnam. Available on Amazon here.

The End of Automobile Dependence: How Cities are Moving Beyond Car-Based Planning by Peter Newman and Jeffrey Kenworthy. Available on Amazon here.

I want all three books for Christmas, please. Thank you!

Viewpoint: Planning’s Role in Social Justice by Grant Prior (page 56)
Have you ever noticed how often commentaries about ‘social justice’ are really nothing more than passionate calls for navel gazing? Justice is supposed to be blind so the concept of social justice is, in itself, an oxymoron. Mic drop.