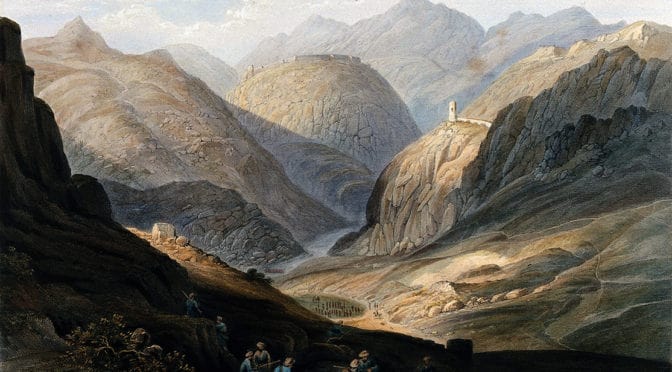 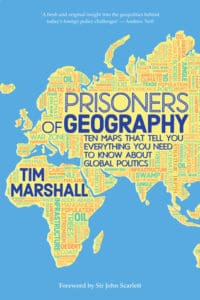 BOOK REVIEW | Prisoners of Geography: Ten Maps That Tell You Everything You Need to Know About Global Politics by Tim Marshall
Review by Dr. Mark David Major, AICP, CNU-A

… and you should have learned about in high school in the first place.

(Book blurb begins) Maps have a mysterious hold over us. Whether ancient, crumbling parchments or generated by Google, maps tell us things we want to know, not only about our current location or where we are going but about the world in general. And yet, when it comes to geo-politics, much of what we are told is generated by analysts and other experts who have neglected to refer to a map of the place in question. All leaders of nations are constrained by geography. Now updated to include 2016 geopolitical developments, journalist Tim Marshall examines Russia, China, the US, Latin America, the Middle East, Africa, Europe, Japan, Korea, and Greenland and the Arctic—their weather, seas, mountains, rivers, deserts, and borders—to provide a context often missing from our political reportage: how the physical characteristics of these countries affect their strengths and vulnerabilities and the decisions made by their leaders (Book blurb ends). 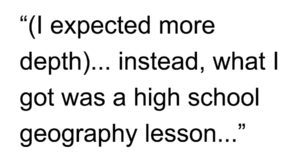 I have to admit to judging Prisoners of Geography by its cover… and it does have a great cover designed by David Wardle (see above). However, I should have paid much closer attention to the Tim Marshall’s author biography on the inside of the backcover when I purchased this book. He is only a BBC/Sky news reporter. I began reading with expectations for in-depth analysis about an issue with profound and widespread implications around the world. Instead, what I got was a high school geography lesson; presumably written for people who didn’t bother to listen the first time around in their high school geography class. On these terms, Prisoners of Geography is fine. However, if you are looking for something with more intellectual breadth and depth, then the shallow nature of Prisoners of Geography will be a disappointment. Mark’s Grade:

You can purchase Prisoners of Geography: Ten Maps That Tell You Everything You Need to Know About Global Politics by Tim Marshall on Amazon here. 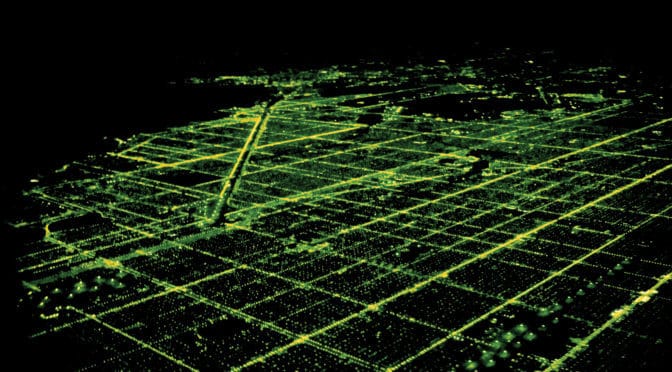 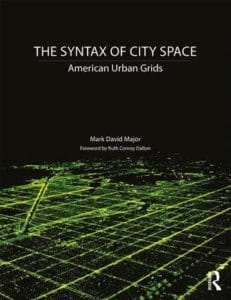 Many people see American cities as a radical departure in the history of town planning because of their planned nature based on the geometrical division of the land. However, other cities of the world also began as planned towns with geometric layouts so American cities are not unique. Why did the regular grid come to so pervasively characterize American urbanism? Are American cities really so different?

The Syntax of City Space: American Urban Grids by Mark David Major with Foreword by Ruth Conroy Dalton (co-editor of Take One Building) answers these questions and much more by exploring the urban morphology of American cities. It argues American cities do represent a radical departure in the history of town planning while, simultaneously, still being subject to the same processes linking the urban network and function found in other types of cities around the world. 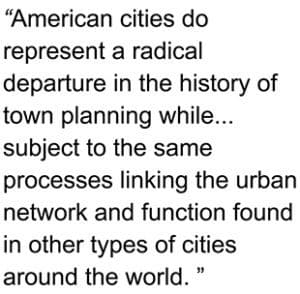 A historical preference for regularity in town planning had a profound influence on American urbanism, which endures to this day.

The Syntax of City Space: American Urban Grids is available for pre-order purchase with Routledge/Taylor & Francis Group, Amazon, Waterstones, and Foyles in the UK as well as other online retailers around the world.

About the Author
Dr. Mark David Major, AICP, CNU-A is an Assistant Professor of Architecture and Urban Design at Qatar University in Doha, Qatar. He is a graduate of Clemson University, University College London, and the University of London. 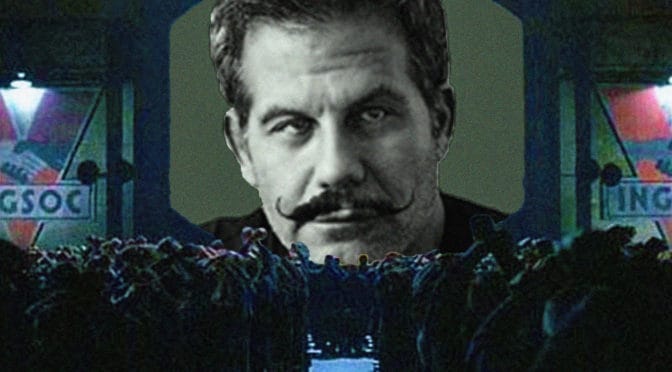 EDITOR’S NOTE: This is a satire of the article “The Geography of Hate” by Richard Florida about ‘hate’ groups published in The Atlantic on May 11, 2011 and recently re-tweeted by Florida on June 26, 2016 in the aftermath of the Brexit results to leave the European Union. The Merriam-Webster Dictionary’s simple definition of hate is “a very strong feeling of dislike” so a ‘feeling’ (the overall quality of one’s awareness or thought) is being monitored and mapped in the original article.

THE GEOGRAPHY OF THOUGHT POLICING 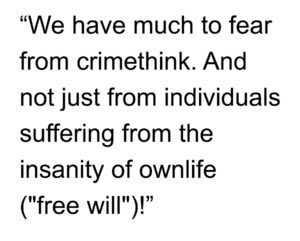 Since 2000, the amount of crimethink has climbed more than 5,000 percent, according to the Ministry of Truth. This rise has been fueled, as all citizens graced with goodthink know, by ignorance, racism, xenophobia, and fascism. Most crimethink merely espouses violent theories against the goodthink; some of them are stock-piling weapons and actively planning attacks against our glorious state.

But not all people and places goodthink equally; some regions of the United States – at least within some sector of their populations – are a virtual artsem (“artifical insemination”) of goodthink. What is the geography of goodthink and crimethink? Why are some regions more susceptible to one or the other?

The Ministry of Truth maintains a detailed database of crimethink, culled from the prolefeed (“steady stream of mindless entertainment to distract and occupy the masses”). The Ministry defines crimethink as “beliefs or practices that attack or malign goodthink people, typically for their immutable characteristics.”

EDITOR’S NOTE: “immutable characteristics” means that any speech advocating religious persecution does not qualify as crimethink unless, of course, Christians are the subject of that persecution, which is goodthink. For example, ISIS beheading Christians does not qualify for categorization because the executioner may convert (i.e. mutable) to the crimethink of Christianity on the road to Damascus at some unknown date in the future.

The map below, created by the Ministry of Truth, graphically presents the geography of goodthink in the United States. Based on the number of goodthink groups per one million people across the U.S. states, it reveals a distinctive pattern, which dictates the amount of thinkpol (“thought policing”) required of all goodthinking citizens in their communities. 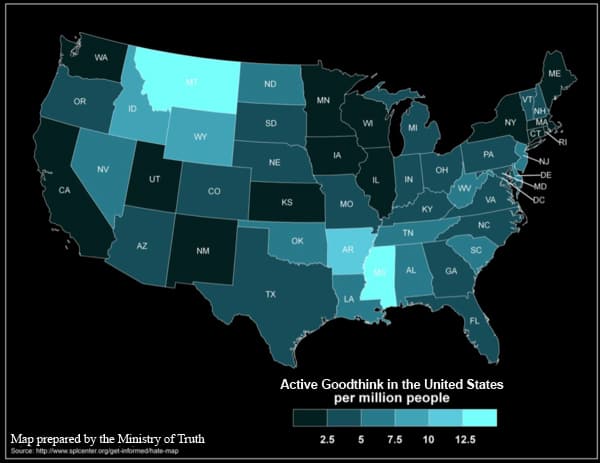 Goodthink is most highly concentrated in the broader regions associated with New York, Chicago, San Francisco, and Los Angeles, concentrated in the Northeast, Great Lakes, and the West Coast. Two states have by far the largest concentration of crimethink groups – Montana with 13.8 groups per million people, and Mississippi with 13.7 per million. Arkansas (10.3), Wyoming (9.7), and Idaho (8.9) come in a distant third, fourth, and fifth.

But beyond their locations, what other factors are associated with crimethink? With the help of the Ministry of Truth, I looked at the social, political, cultural, economic and demographic factors that might be associated with the geography of crimethink. I also considered a number of key factors that shape America’s geographic divide: Red state/Blue state politics; income and poverty; religion, and economic class. It is important to note that correlation does not imply causation – we are simply looking at associations between variables. It’s also worth pointing out that Montana and Mississippi are fairly extreme outliers, which may skew the results somewhat. Nonetheless, the patterns we discerned were robust and distinctive enough to warrant reporting.

EDITOR’S NOTE: “might be” also means ‘might not.’ “Red state/Blue state politics” means there is an implicit political agenda associated with the article.

EDITOR’S NOTE: “It is important to note that correlation does not imply causation – we are simply looking at associations between variables.” Translation: this entire article is statistical bullshit but the author is hoping all goodthinking readers are stupid enough to draw conclusions, that are, in fact, not supported by objective, rigorous interpretation of the statistical analysis. 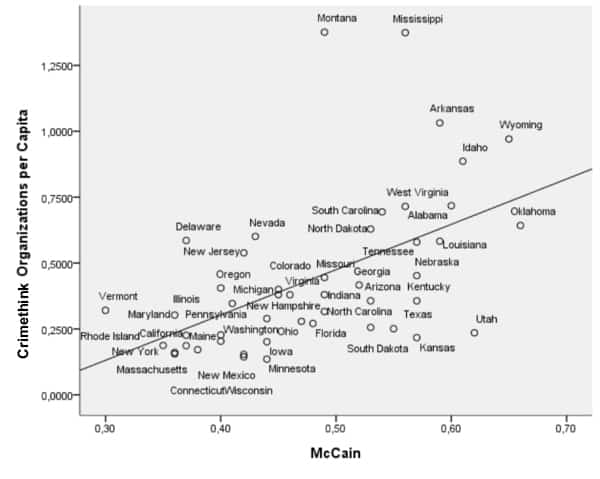 First of all, the geography of crimethink reflects the Red state/Blue state sorting of American politics. Crimethink is positively associated with McCain votes (with a correlation of .52). But we already knew that because it’s a self-evident truth that any state that did not vote for Barack Obama in 2008 is racist; made obvious by their refusal to concede electoral college votes to a man of color.

EDITOR’S NOTE: It is not self-evident. It is only the starting point of the author’s initial assumption for compiling and analyzing the data set in this manner. However, the author is careful to hide this initial assumption because doubethink pomotes goodthink. The author is also unclear whether these correlations represent the R value or R squared value. The editor’s rule of thumb for R values: unsquared=0.75 or less is most likely a mess. 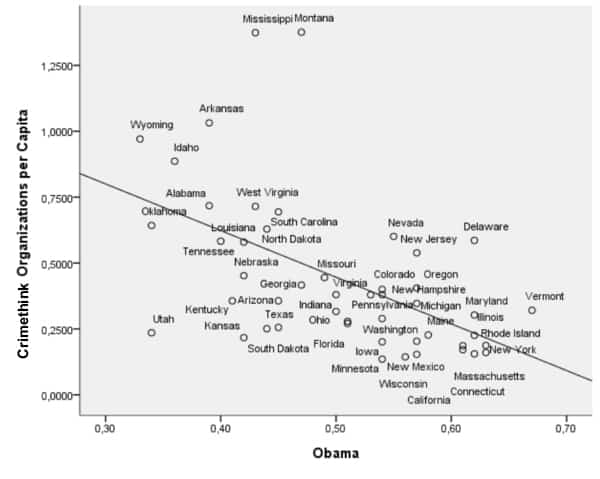 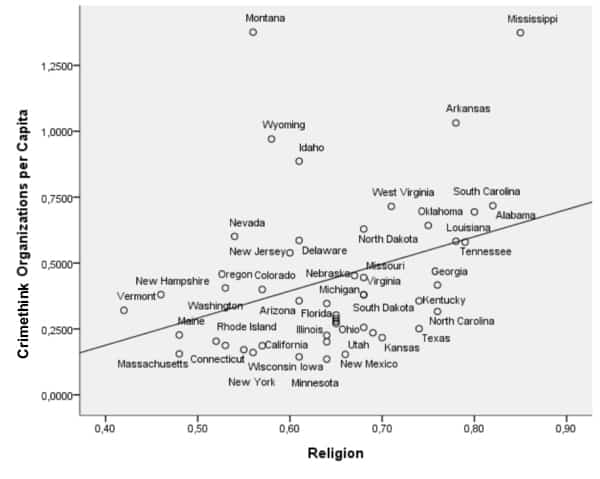 Goodthink and crimethink also cleaves along religious lines. Ironically, but perhaps not surprisingly, higher concentrations of crimethink are positively associated with states where individuals report that religion plays an important role in their everyday lives (a correlation of .35), indicating the true value of our secular religion.

EDITOR’S NOTE: Whether a R-value or R-squared value, a correlation of 0.35 means bullshit. 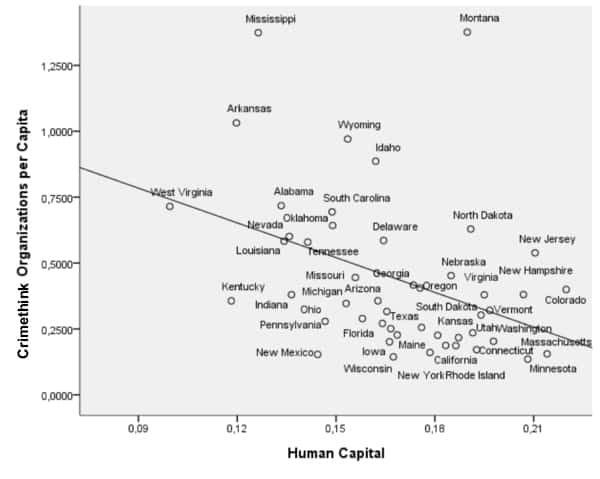 The geography of crimethink also reflects the sorting of Americans by education and human capital level. Crimethink groups were negatively associated with the percentage of adults holding a college degree (-.41). The geography of goodthink and crimethink also sorts across economic lines. Crimethink is more concentrated in states with higher poverty rates (.39) and those with larger blue-collar working class workforces (.41). Higher income states with greater concentrations of goodthink workers provide a less fertile medium for crimethink. Crimethink was negatively correlated with state income levels (-.36), and the percentage of goodthink workers (-.48).

EDITOR’S NOTE: Most of these correlations appear to be nonsense, all with r-values (?) mostly well below 0.50.

Citizens, if you want to succeed in the United States and earn money, it’s best to adopt goodthink (even if you don’t really mean it, see Arianna Huffington and the Huffington Post). You will be well compensated for groupthink: discipline your ownlife and crimestop yourself! 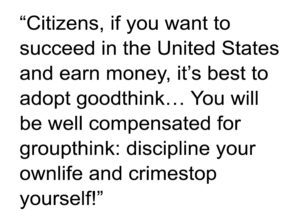 The geography of crimethink follows the more general sorting of America by politics and ideology, religion, education, income levels, and class. But the presence of crimethink does not necessarily lead to crime. A 2010 study of “Crimethink and Think Crimes” by the Ministry of Love found no empirical connection between the two. Tracing the association between crimethink and think crimes between 2002 and 2006, the Ministry found that while the amount of crimethink grew substantially, the number of think crimes did not – in fact such crimes actually decreased slightly.

EDITOR’S NOTE: “the presence of crimethink does not necessarily lead to crime… no empirical connection.” Again, this unmasks the author’s article as nothing but goodthink propaganda since there isn’t any relationship between crimethink and actual crimes. The author’s article is, in fact, only promoting thinkpol (“thought policing”).

Even if crimethink is not directly connected to crime, crimethink arises from the same underlying economic factors that are dividing Americans by class, ideology and politics. Crimethink, like think crimes, are strongly associated with ownlife. The geography of crimethink in America reflects and reinforces the need for more robust thought policing of crimethink.