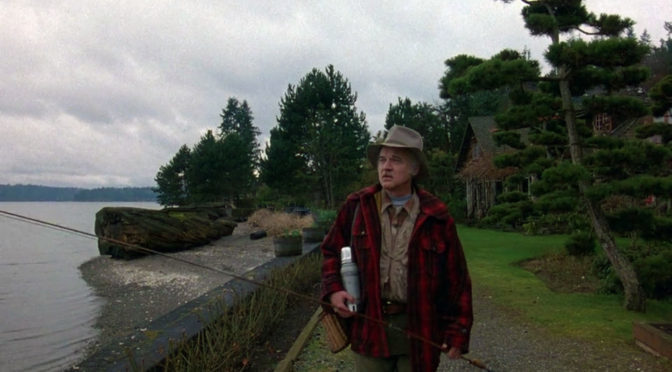 This Moreso article is a follow-up to an earlier one, “Generational Shame in David Lynch’s Twin Peaks (28 June 2017), available here.

Judging from the immediate response on Twitter and subsequent mainstream media recaps (with the exception of Dan Martin at The Guardian and a few others), many people seem perplexed about the open-ended finale of Twin Peaks: The Return. I am not. As with all things David Lynch, you have to appreciate the (weird) window-dressing but, nonetheless, ignore such affectations when it comes to explanations by focusing on the essential. When you do so, there is a lot of narrative meat to chew in the final two episodes, which seems to confirm our prior hypothesis that Twin Peaks is about Baby Boomer shame. We will not recap that argument now; you can read it here.

WARNING, SOME SPOILERS AHEAD IF YOU ARE NOT FAMILIAR AT ALL WITH TWIN PEAKS

What are the key points? Where do we keep our focus to interpret this bizarre, frightening, and even nihilist (i.e. spiritually bleak) ending? After all, it cannot be a coincidence that both episode 17 and 18 ended with Sheryl Lee’s blood-curdling scream, putting aside the end credit sequences: one musical and the other a super slow-motion replay of Laura Palmer whispering something disturbing in Agent Cooper’s ear in the Red Room of the Black Lodge during the first episode. Sidenote: Sheryl Lee (to the upper right as Laura Palmer) has to go down in cinematic history as one of the all-time great screamers, worthy of the leading ladies in the best Alfred Hitchcock films.

“The past dictates the future.” – Agent Cooper in Episode 17 of Twin Peaks: The Return

This is a truism reiterated by Twin Peaks. Let’s be honest: what would a ‘happy resolution’ for most viewers of any generation look like for the central storyline (e.g. the murder of a prom queen) in Twin Peaks? FBI Agent Cooper solves the murder? That already happened 25 years ago during Season 2. Laura’s Baby Boomer father Leland — possessed by the evil spirit BOB — raped and murdered her. The destruction of the evil spirit BOB? Lynch and Mark Frost provided this closure in the penultimate episode when BOB was defeated by a Millennial, no less, wearing a green garden glove that gave him supernatural strength… yeah, Twin Peaks is unconventional like much of the Millennial Generation itself in some ways. It is appropriate, if you ask me. 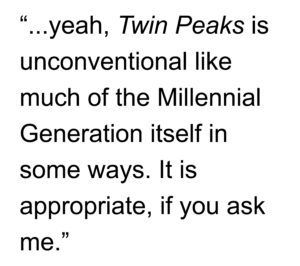 No, for most viewers, the ‘happy resolution’ would be preventing the murder of Laura Palmer and subsequent emotional and social damage to the small Washington town of Twin Peaks in the first place. However, this is not possible. If Laura Palmer was never murdered, then there would not be any Twin Peaks for viewer to invest in the first place. The pain of the past dictates the consequences of the future.

Nonetheless, Lynch and Frost offer viewers this exact prospect. Somehow, Agent Cooper (Kyle MacLachlan) goes back in time and leads Laura away from her eventual murder. Laura’s dead body ‘disappears’ from where it was found on a shoreline next to a massive downed tree in the opening scenes of the original series (see the header image at the top). The results simmer throughout the final episode until the disturbing climax when a (perhaps changed) Cooper finds ‘Laura’ (who says her name is Carrie Page) in Odessa, Texas and tries to lead her home to her mother Sarah in Twin Peaks, Washington. The closing moments are characterized by confusion on the part of Agent Cooper and that last blood-curdling scream of Sheryl Lee as ‘Laura’ hears the echoes of her (now-remembered?) troubled past. To be sure, it is a bleak ending. This is reinforced by a replay of the scene of Laura in the Black Lodge whispering something horrifying to Agent Cooper, except this time Lynch allows the camera to linger on the disturbed expressions on MacLachlan’s face using super slow motion. Cooper cannot change the past any more than we can change our own pasts. Nonetheless, this is a tantalizing feature of several narratives in fiction (Peggy Sue Got Married, Back to the Future, Doctor Who, and so forth). Too many to recount here.

Interestingly, the name of Odessa is the feminine form of ‘odyssey,’ which suggests a key aspect of the story of Twin Peaks is the journey of its female characters. Mainly, I would argue this means Laura Palmer, Donna Hayward, and Audrey Horne. Shelly as a character, played with panache by the beautiful Madchen Amick, always seemed more about the soap opera aspects of David Lynch’s original concept for Twin Peaks than a key to its main story.

Many viewers seemed especially upset about the brief appearance and utter lack of resolution to the nonetheless emotionally draining story — if only for its obtuse nature— involving Audrey played by the wonderful and IMO still beautiful Sherilyn Fenn. Is Audrey in a coma? Is she in an insane asylum? Is she the ‘dreamer’ to which Gordon Cole (played by David Lynch) refers? The last seems unlikely, except perhaps in a very narrow sense related to her own story in Twin Peaks: The Return. The lack of a resolution is the point. Much of the story about Generation X is similarly unresolved though our past will dictate the consequences of our future.

I would argue there is a ‘holy trinity’ of Generation X females at the heart of Twin Peaks, each representing different aspects of my often-forgotten generation. The mainstream media is almost always all about the big demographic waves represented by the Baby Boomer and Millennial generations. There is the wasted potential of Laura Palmer: the bright, eager-to-help, beautiful prom queen, who was a victim of incest and murdered by a salacious Baby Boomer father unable to control himself or the evil spirit BOB.

There was Donna Hayward (famously played during the original Twin Peaks series by Lara Flynn Boyle). Much like the ‘lost’ nature of Generation X, Donna is missing from Twin Peaks: The Return. She represents our ‘lost generation’ by her absence. Then, there is Audrey Horne, who’s story is unresolved, still waiting to be written in history.

All of this is wrapped within the distinct but skewed perspective of a Baby Boomer filmmaker (David Lynch), who symbolically replicates much of the generational shame previously seen in Episode Eight, “Gotta Light?” The young-end-of-the-range-for-a-Baby Boomer Agent Cooper fails to fix the past. The disturbing abortion imagery reappears during the scene at the beginning of episode 17 when the evil spirit BOB emerges from the doppelgänger body of Mr. C to, in effect, become an evil fetus attacking the real Agent Cooper and our nondescript Millennial hero Freddie, who finally rids us of the evil once and for all. Baby Boomers just can’t get past their guilt about their unwanted ‘latchkey’ kids and excessive-to-extreme abortion culture. In any case, Freddie’s destruction of BOB symbolically points to Baby Boomers coming to believe what Generation X had always believe and intended for their children; namely, to save the world from the excesses of the ‘Me’ Generation represented by their grandparents.

I thought it was the most appropriate, even a perfect ending for Twin Peaks. The Baby Boomers cannot ever fix their past mistakes. They have to live with the shame of their many mistakes. The story of the much-abused, much-depleted Generation X is still being written, and the Millennials carry our collective hopes into the future. Let’s hope we haven’t managed to screw them up too much. They need to save the world. Get on with it.

Moreso is a new series of short ruminations or thoughts of the moment, usually of less than 500 words, from The Outlaw Urbanist.